1 / 10
Drawings and proposals for projects realised and not.
Drawings/Proposals 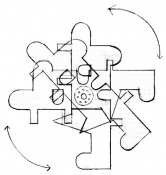 6 refrigerators attached at their base with me crawling inside one to the other.

It started out as a drawing to visualize what would be needed to connect 6 refrigerators at their base. The idea is for me to crawl inside each and traverse from one refrigerator to the other, there by making the six pointed structure rotate as the weight and location of my body shifts in relation to its axis. A year had passed till I made a small to scale model after which I immediately wanted to see how large I can go far exceeding the measurements required for the refrigerators making another even larger structure out of very light material, (Styrofoam) and “cynisizing” it's stoic lab quality with wall paper and table clothes. Now I have a structure in my kitchen (studio) that will have to be destroyed in order to remove it.
07-27-09

I've just completed a prototype "getting back to base" for the installation/performance "Six degrees of Separation" which rather expresses the predicament of "optimism in the line of fire"....but what to say, it all ends up a "Vehicle for Another Landscape". 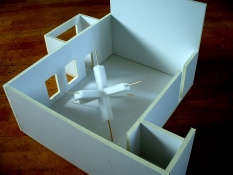 The Drop Zone of a Falling Star.
2010
Performance
Variable

Four sky divers jump out of a plane in the formation of a star with flares attached to their ankles and wrists. A video camera man descends along side the "falling star" as this footage is projected live on a screen at the Drop Zone. 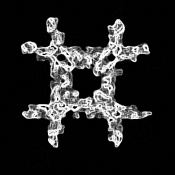 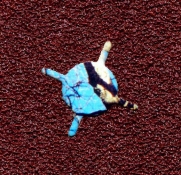 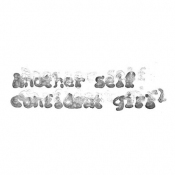 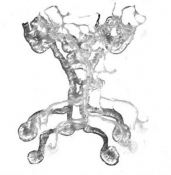 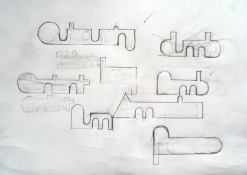 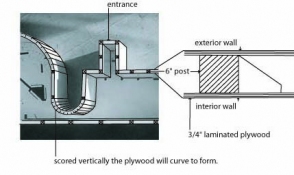 "Outsourcing" as an Outdoor Sculpture.
2008
Proposal

Diagram for "Outsourcing" as an outdoor sculpture built large enough for human occupancy. 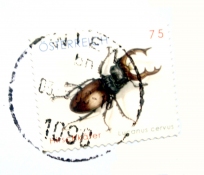 For the show, A Book about Death. 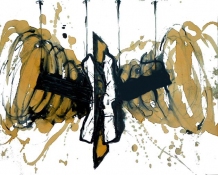